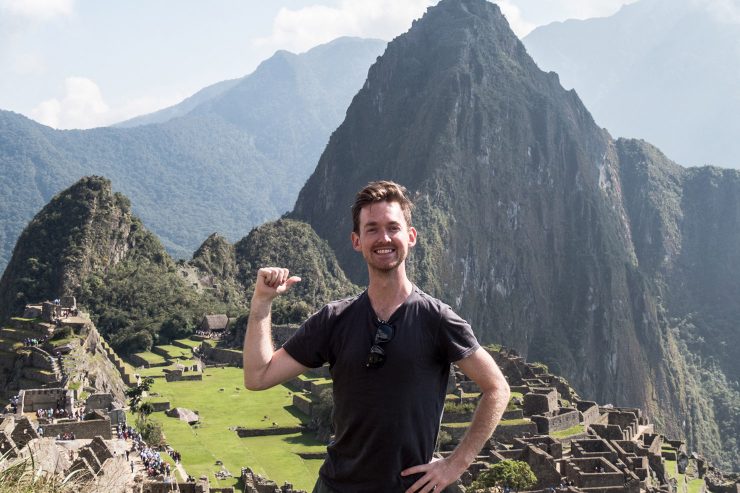 2018 was an endless stream of unexpected and unplanned challenges, mishaps and surprises.

I sit here in a cushioned alcove overlooking the lakeside village of Åre, Sweden after surviving (and I honestly mean surviving) my first three days of snowboarding. I’ve somersaulted on my head, banged my coccyx and faceplanted more than a drunk man with a balance problem. But, the experience has been beyond incredible. The alpine landscapes, the expansive frozen Åre lake, the New Years fireworks, the questionable ski fashions, the boisterous Scandinavian singalongs; it’s like nothing I’ve experienced before.

Not only have these past few days initiated me to snowboarding, but they’ve also acted as my introduction to real snow. Quite literally the first time I saw this cold white fluffy stuff, I hurled myself down a hill covered in it with fibreglass fastened to my feet. The crazy things you do, eh? 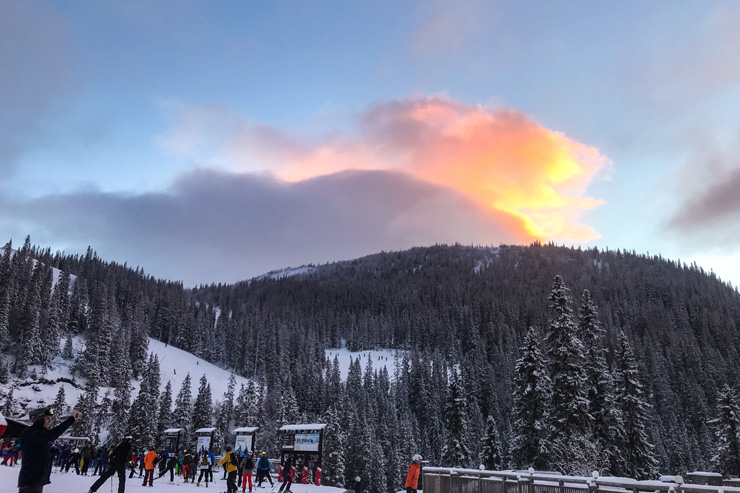 A brief but beautiful batch of blue sky over the slopes.

I didn’t know how this year would pan out. I certainly didn’t expect to be bundled up in Sweden’s mid-north watching my first ever snowflakes drift inches from my nose. I began the year with a vague ambition to house sit in every Australian state, but otherwise, my plans were largely left to chance. Living a semi-rudderless life has required some major adjusting, but now, the positives of flexibility and freedom far outway my inherent need for stability and security.

2018 took me to places I never dreamt I would see, met people from countries I barely knew existed, reconnected with friends I’d lost to the ages and smashed through mental and physical boundaries I believed were unbreakable. I honestly can’t comprehend how much I’ve suckled from the world’s vast supplies of nectar this year. If you’d said back in 2016 that ‘Office Josh’ would be climbing mountains, walking long distance trails and snowboarding down perilous slopes, I’d have given you a perplexed look and politely asked you to remove yourself from the room.

Reflecting on 2018 has left me with a sense of fulfilment that I’ve previously never enjoyed. Throughout the mid-2010s, grinding my way through the 9 to 5, I regularly felt I’d achieved next to nothing. Time whizzed by too quickly and too haphazardly that my hyperactive internal stopwatch couldn’t pause and consider on all the good I had pushed out into the world. 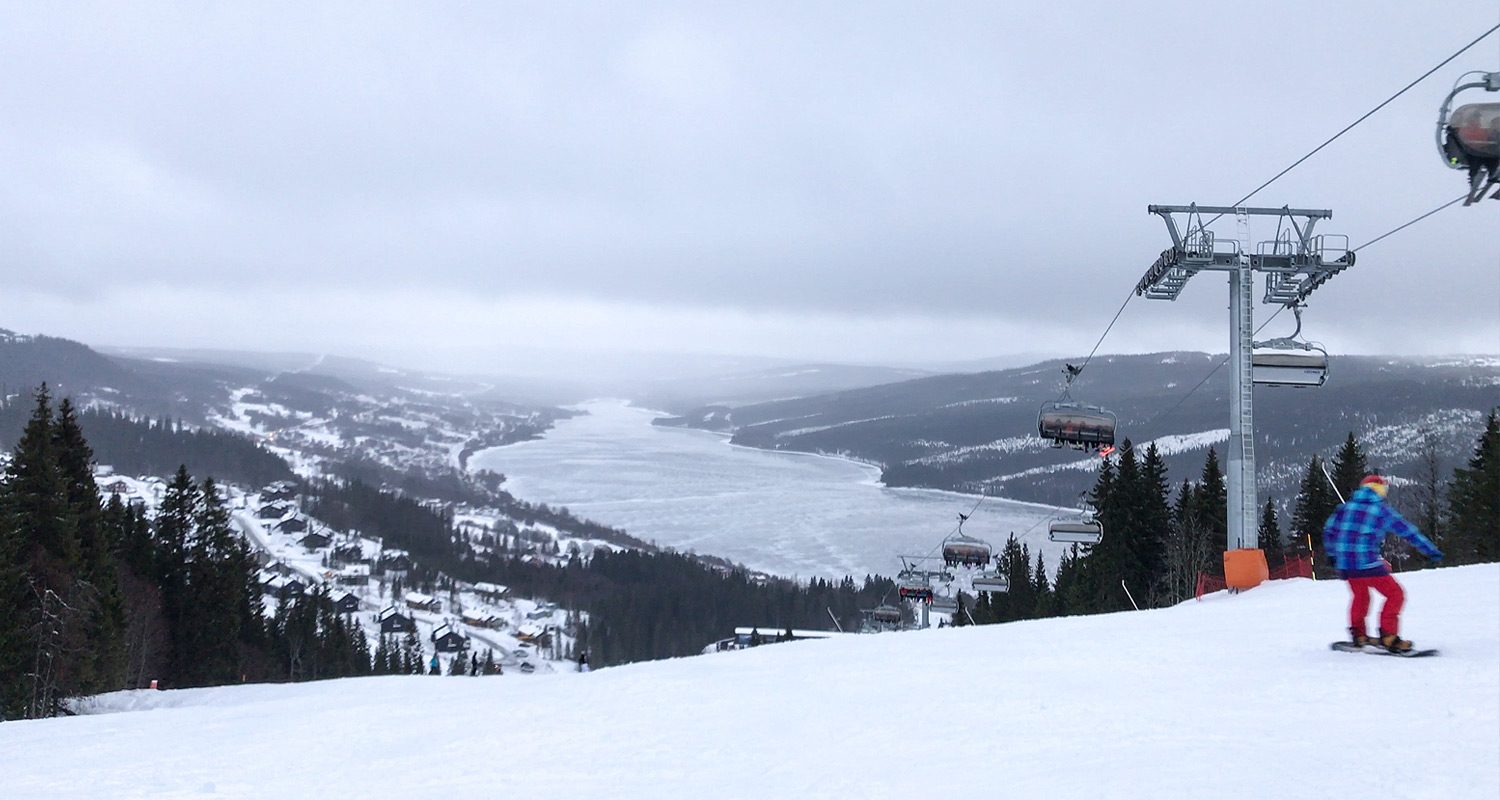 I recently met up with one of my most accomplished high school mates. For as long as I’ve known her, she’s been one of the most successful, skilful and charismatic people I have ever had the pleasure of knowing. But, despite her obvious and widely-applauded talents, she couldn’t grasp the magnitude of her achievements until she was encouraged to rewrite her CV. It was apparent to everybody, but her, that she was absolutely killing it. When you’re buried in a ‘head down, bum up’ headspace, self-reflection can often seem like an indulgence. Once she had rewritten her resume, the stark truth dawned on her, ‘girl, when do you get time to sleep?‘

Her story acted as a timely reminder to consider all that I had accomplished in 2018. It sparked me to write a list. I recommend you do the same. Record everything you achieved this past year. From places you’ve visited to mates you’ve supported, to charities you’ve helped, to randoms you’ve befriended, to your professional achievements, to the money you’ve saved, to plants you haven’t killed; everything counts.

It might not sound particularly grand, but house sitting in every state in Australia has been a weird ambition of mine since I began the practice back in 2016. How wonderful that I can explore my own country without stressing about accommodation and finding stability in a new city.

Further to the sits I completed in 2017, my 2018 adventures took me back to my home state of South Australia, into Melbourne, down to Hobart and finally into Sydney where I concluded my first year as a wandering digital nomad. Now, I just have the territories to go!

The most heartwarming feedback I receive from homeowners is that they felt relaxed knowing that their belongings were well cared for in their absence. In 2018, I supplied 3,912 hours of worry-free travel to my homeowners so they could enjoy weddings, honeymoons, family getaways, business retreats and long-awaited holidays. 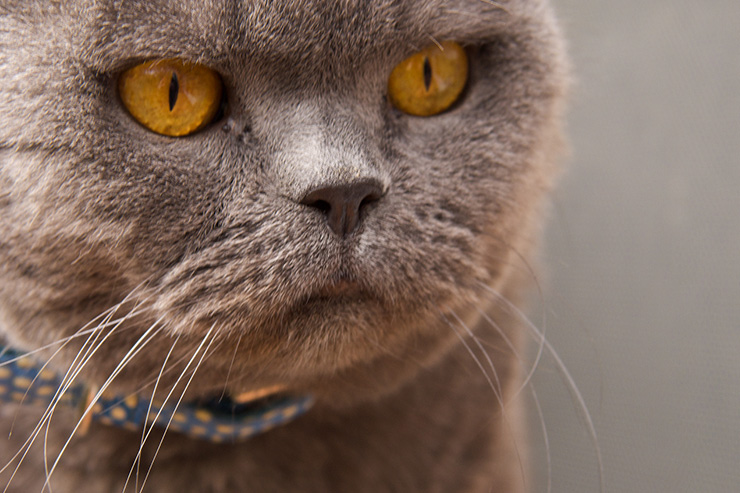 Despite Jude’s surly gaze, I was assured he enjoyed my company.

It seems there is an age gap of about 25 years, in which road trips around Australia, for Australians, go missing. Many young adults prefer to head to overcrowded Bali beaches rather than explore all the amazing landscapes in their own country.

ANNUAL BUDGET 1 year of full-time travel, what have I spent?

In 2018, I tried to debunk that stereotype. Travelling with Germans, Canadians, Swedes, Argentinians and a Hong Konger I road tripped around South Australia’s Kangaroo Island, along Victoria’s Great Ocean Road and up to the Grampians, through rural New South Wales and into the Blue Mountains, and all over Tasmania’s pristine countryside.

It’s fascinating to see how ‘the other half live’, but until you understand what you have in front of you, it’s difficult to have a realistic perspective. After experiencing both the inspiringly good and disappointingly bad in Australia’s backyard, I have a more rounded appreciation of why it’s called the ‘lucky country’. 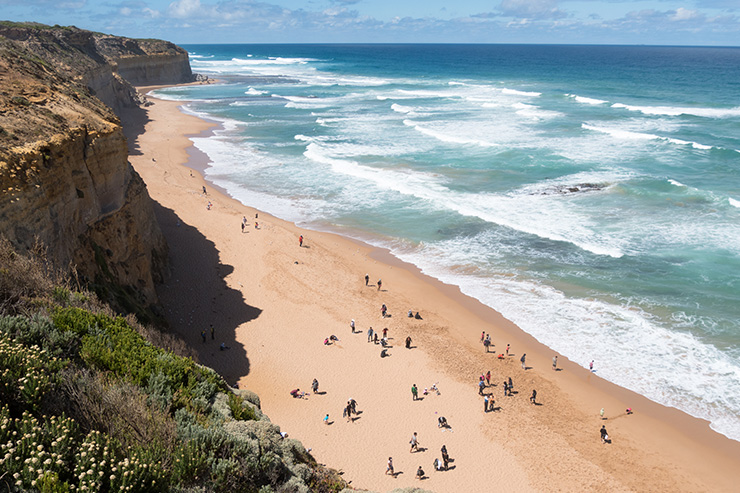 The views along the Great Ocean Road were mesmerising.

Life in Australia, and to a large extent Europe, is extremely comfortable. Familiar laws, infrastructure, language, cleanliness and general expectations make travelling in these regions straightforward. This is not the case for South America. Adventures through Chile, Bolivia, Peru and Ecuador were as inspiring and engaging as they were confronting. But, I didn’t up and leave my desk job in Adelaide to be comfortable. This was the challenge I needed.

While I fell in love with the Australian country landscapes in 2018, the views throughout South America revolutionised my outlook on nature. My passion for the environment and the great outdoors grew exponentially as a result of trips to the Galápagos Islands and the four-day Salkantay Trek to Machu Picchu. 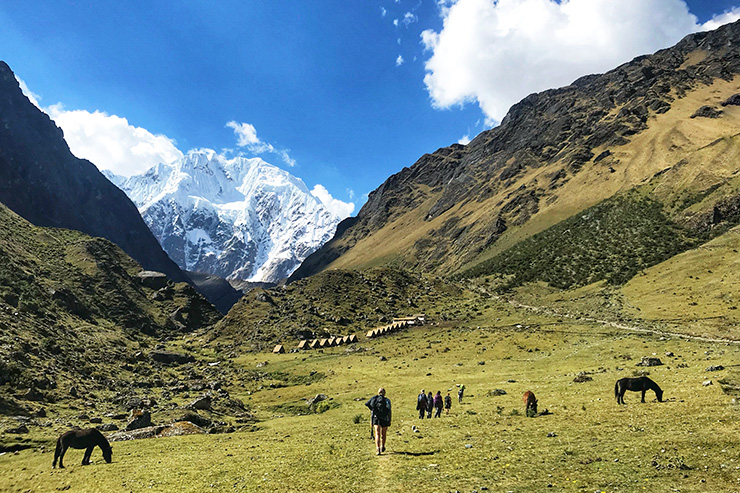 Walking toward the imposing snow-capped peak of Salkantay Mountain.

If travelling through South America was a challenge, hiking South Australia’s 1,200km Heysen Trail was mission impossible. Not only had I never trekked a long distance trail before, but I had foolishly decided to record the entire trail via iPhone, DSLR camera, GoPro and Drone. Note: believe it or not, these items aren’t typically included in your hiking kitbag.

Follow Week One of the Heysen Trail journey here.

On top of the walking the trail, I decided to make the adventure bigger than just myself. The improvements in my mental health over the past 12 months inspired me to raise money and awareness for mental health issues in Australia.

I can categorically say that walking the Heysen Trail is my most beneficial undertaking. Ever. Period. Full stop. It changed me as a person. Despite the deflating hardships and the constant mental and physical battles, the juice was very much worth the painful squeeze. I feel happier, revitalised, more energetic, more grateful and less dependent on material possessions since completing the hike.

On top of the plethora of personal improvements, I raised $12,000 and a mountain of exposure for mental health awareness and the Black Dog Institute. Not in a million years could have I imagined I would achieve this in just over three months of organising and hiking. 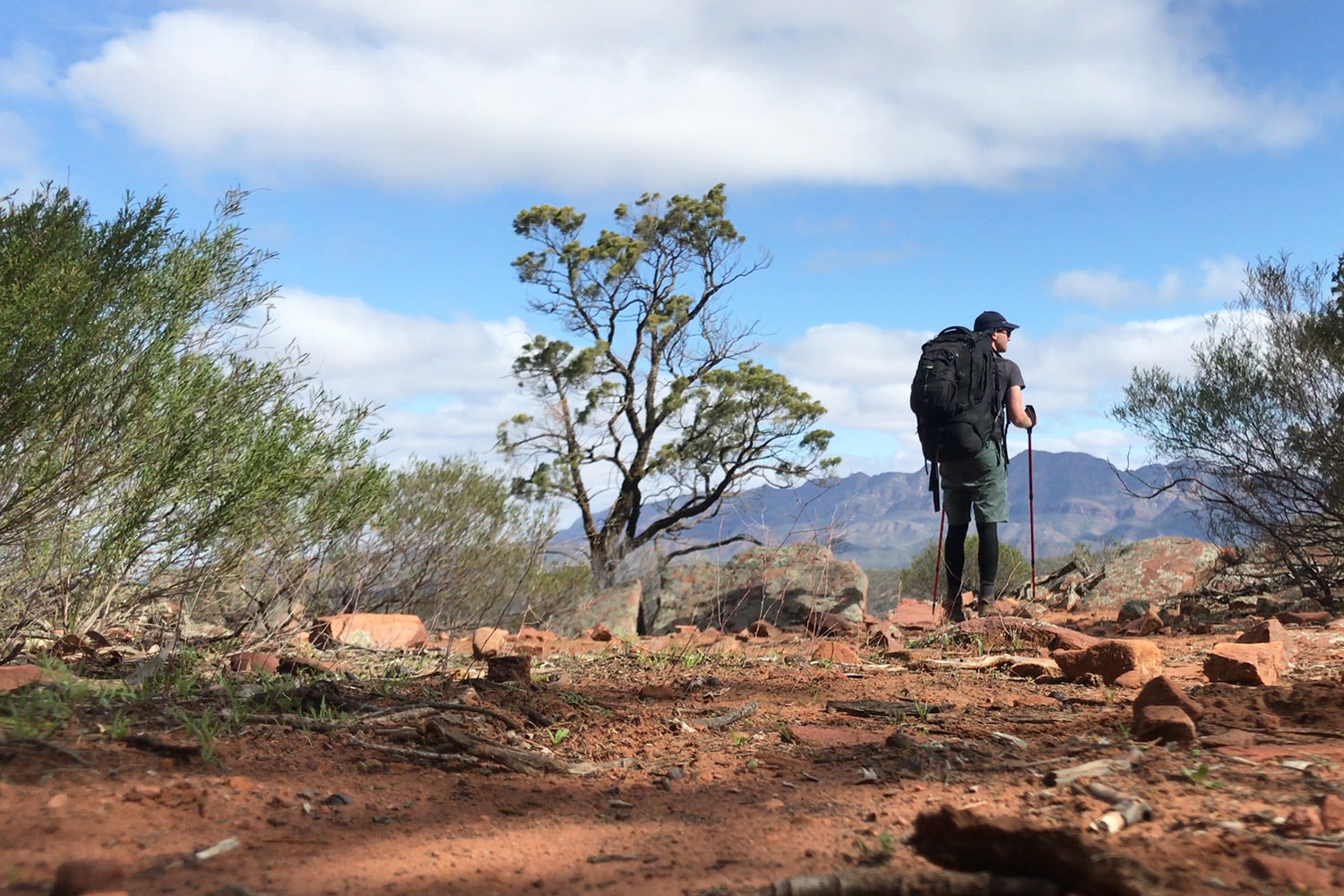 As with any hiker who has just completed a long-distance trail, I dipped into a lull when I arrived back home. I sorely missed the simplicity of the outdoors life, but, simultaneously, slipped back into ‘normality’.

The ease at which I could have picked up the comfortable life I left back in 2016 was agonising. I knew I would be better off for the experiences I had had since then, but was this what I wanted, nay, needed? No. I had to snap out of it. Heading back to Europe, for the first time since 2015, was a necessity. There is so much more I need to see.

The rollercoaster of emotions that inevitably come with a long-distance hike continued well after the trail itself. I experienced first hand how crucial it is the stick to your guns, even when there is a more comfortable and ‘sensible’ option presented in front of you. I’m certain ‘Office Josh’ would have taken the easy route. The vastly more experienced ‘Travel Josh’ is made of sterner stuff. 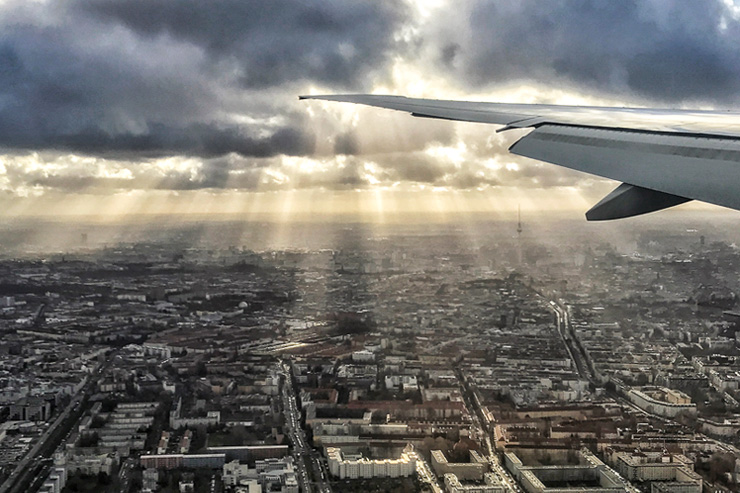 My view as I touched down in Europe. 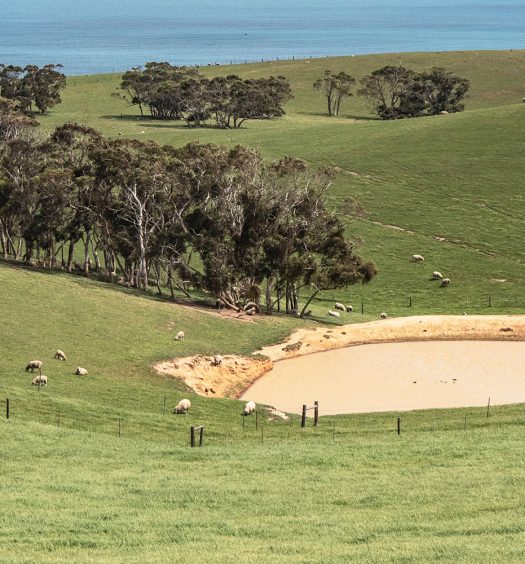