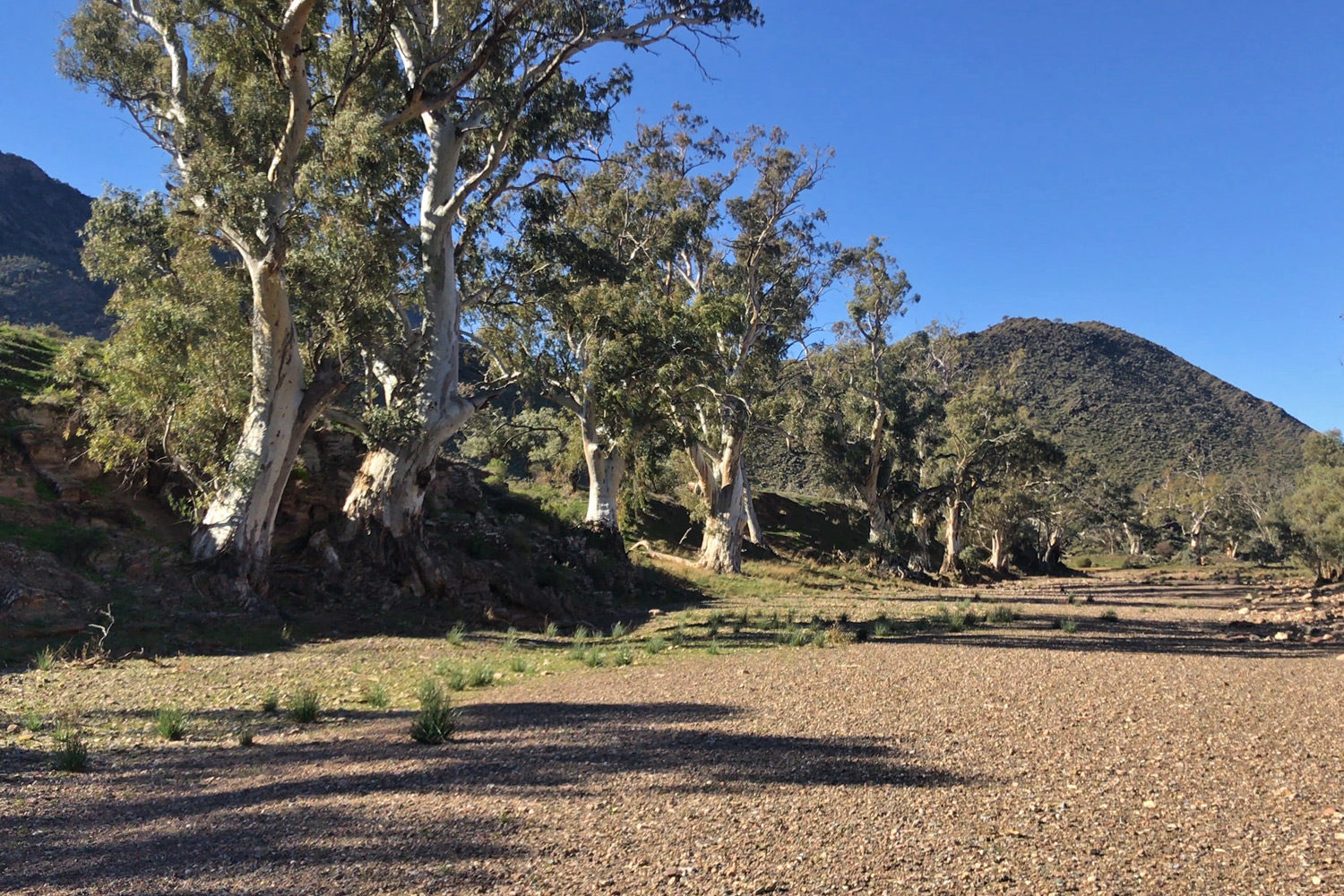 Can I get an Amen for flat surfaces?

Compared to an unrelentingly undulating Day 4, the relatively even 17-kilometre stretch on Day 5 was just the ‘rest’ my exhausted legs had screamed for. I spent the day zipping between dry creek beds, fields, forests and not so well worn paths. Thankfully, my ankles adapted quickly to the Flinders Ranges’ multitude of unstable surfaces. However, a self-contracted stomach bug had bubbled away overnight and threatened to derail my next few weeks.

After 94 hardy kilometres, I had grown acutely familiar with the aches associated with long-distance hiking, and they no longer slowed me down. I could feel my body responding faster as I hobbled amongst the shortening shadows at Red Range Campsite. But, as it turned out, a few customary pains were the least of my worries.

Due to a late-night arrival and a set of sleepy eyes, I missed the campsite’s second, much cleaner, tank. My drippy water bladder had long run dry by the time I constructed my tent under the starry sky; I was beyond parched and needed to rehydrate. By the time I awoke mid-morning, my intestines had already performed an entire acrobatic routine. 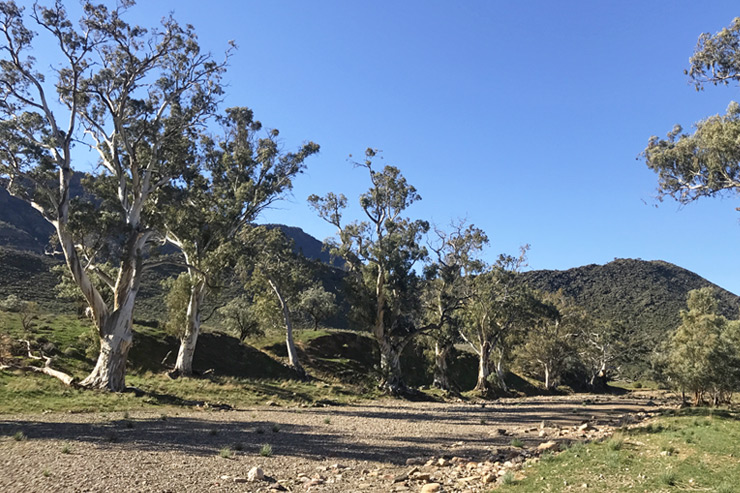 A postcard-ready Day 5 eased my ailments.

Somewhat fortunately, my bowels were accustomed to hiking with mild-dysentery from my 4-day Salkantay Trek to Macchu Picchu in Peru. If that’s not taking a positive outlook, then nothing is. As such, it wasn’t long before I was back following the Heysen Trail along the foothills of the imposing Elder Range. 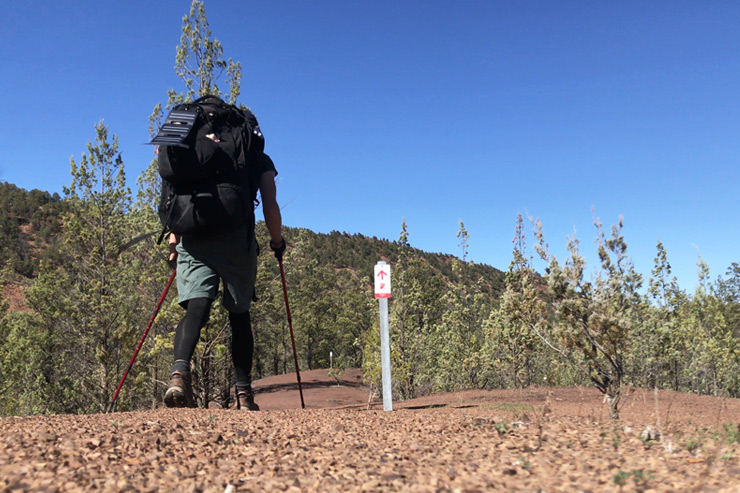 Following the stony channel between Elder and Red Ranges.

I could barely grasp the extraordinary width of the region’s expansive creek beds. In this barren part of the world, it’s unfathomable to think a body of water ever existed that filled these often 30-metre wide waterways. When I discovered Mayo Hut sitting aloft one of these mighty channels late in the afternoon, I made the startling realisation that I’d spent the entire day in solitude.

It was 1899 when the Mayo family moved to the small humble cottage on the banks of the Wonaka Creek. When they arrived at the homestead their main possession was courage, but they left the property with less.
Trailwalker Article (1988)

I hadn’t interacted with another soul for the entire day; no hikers, no farmers, no tourists, no cars, no signs of civilisation. Plus, my phone was still without reception. Today was my first ‘Tomorrow When The War Began’ day; anything could have happened in the outside world and I would be none the wiser. This was not a scenario I could ever remember finding myself in. 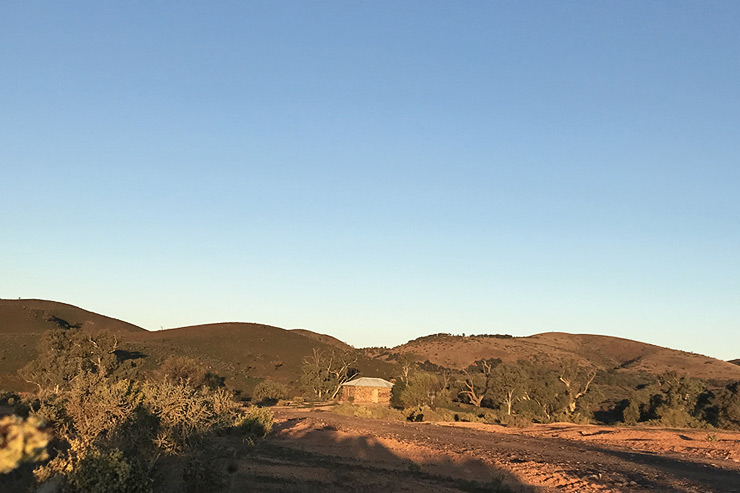 Mayo Hut may just be the most charming hut on the trail.

The gorgeously-restored hut was just what the doctor ordered. Bunks, mattresses, pots, pans and the most perfectly provincial fireplace built for snug night’s accommodation. But, I won’t lie, after 5 days of wandering through the wilderness, I was ready for a pub and another parmy. Next stop on Day 6, the tourism hub of the Flinders Ranges, Hawker. 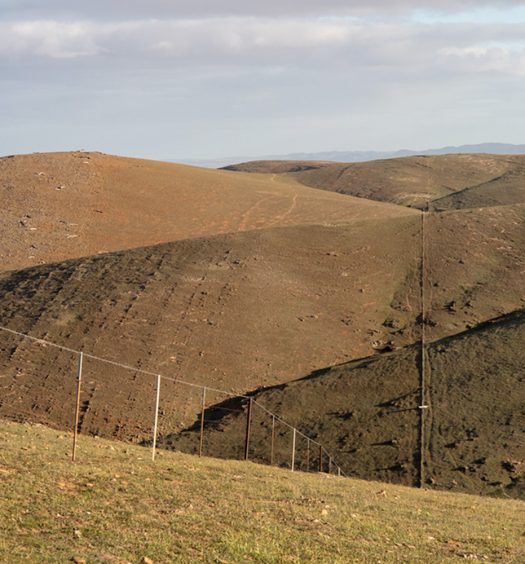 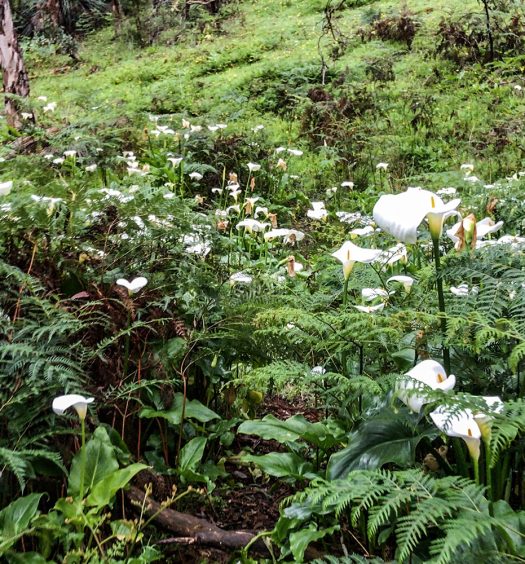