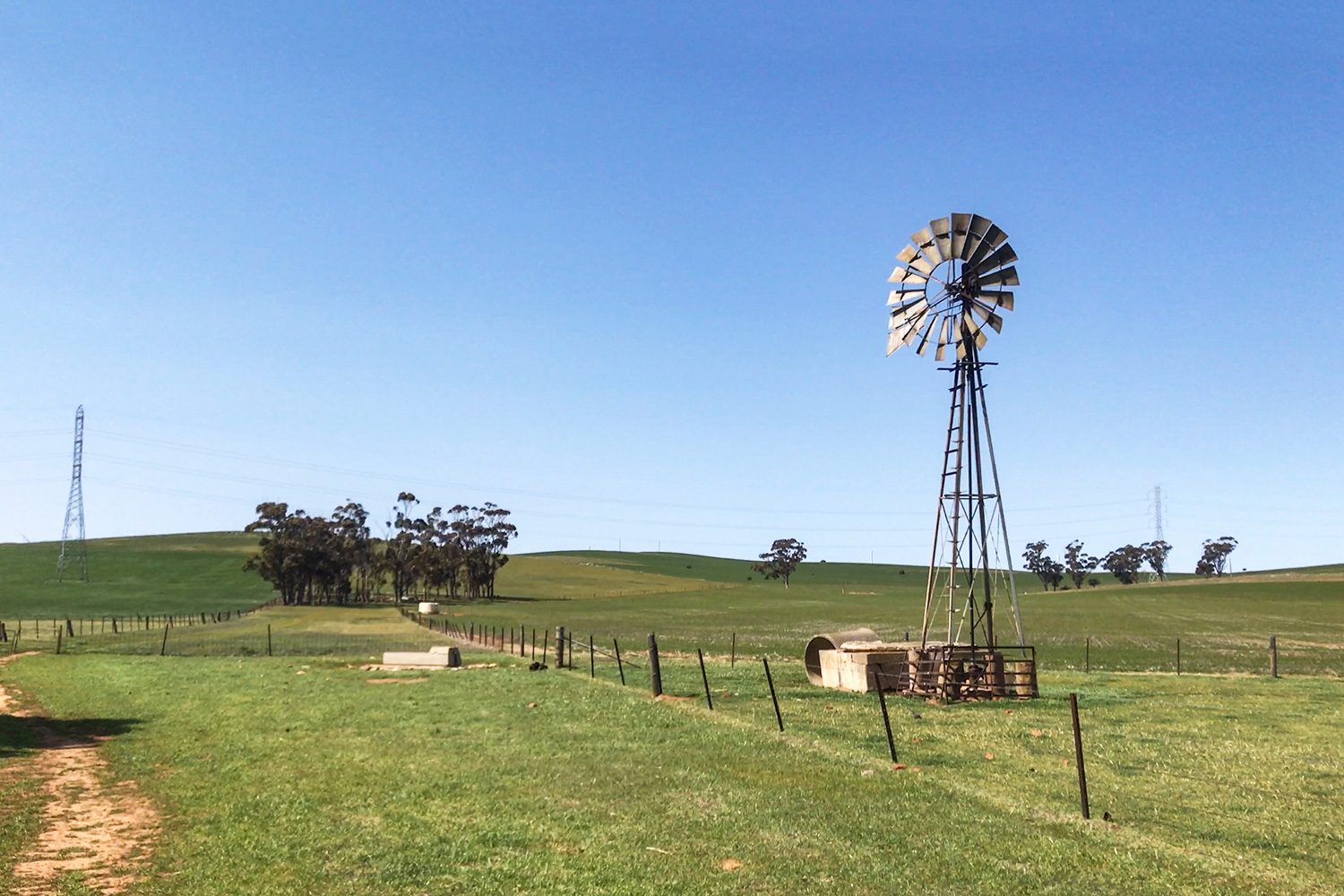 Most days on the trail it's the definition of solitude. Day 28 brought a relative cavalcade of faces.

Imagine not seeing another human for an entire day—no talking, no witty banter, no face-to-face communication whatsoever. Now, multiply that by a month. For large stretches along the Heysen Trail, I was devoid of any direct contact with the outside world. I had never felt so completely isolated, and I could sense the separation was affecting my socialising skills. Typically, I can’t squeeze enough words into a sentence. But after weeks of limited interactions, I struggled to piece together even the simplest of sentiments.

I needed to brush up my conversational skills on a ‘crowded’ Day 28. Compared to most sections on the trail, it was like jostling through a moshpit. I had an unprecedented three—yes, you read correctly, three—unexpected run-ins on my journey to Hallett Railway Station.

I awoke with the tent fabric pulsating inches from my face. The overnight galeforce winds had not eased in the morning light, and my traumatised shelter had begun to yield. Following eight hours of constant pummeling at the high-altitude Whistling Trig Tank, the poles were on the verge of snapping. However, after a high-octane end to Day 27, I didn’t want to move.

I dozed, unflustered by my swirling surrounds, for another 15 minutes before the tent decided I should start my day. One of the highly-stressed pegs broke free from the weathered soil and flung itself off the range. From there, it was chaos. I scrambled to find a replacement peg, while frantically stuffing loose clothes, food and equipment into my rucksack, before, they too, could escape down the grassy slope. After playing several rounds of ‘Twister’ with the tent’s fluttering corners, I finally stabilised most of my belongings and slumped exhausted on the canvas floor. 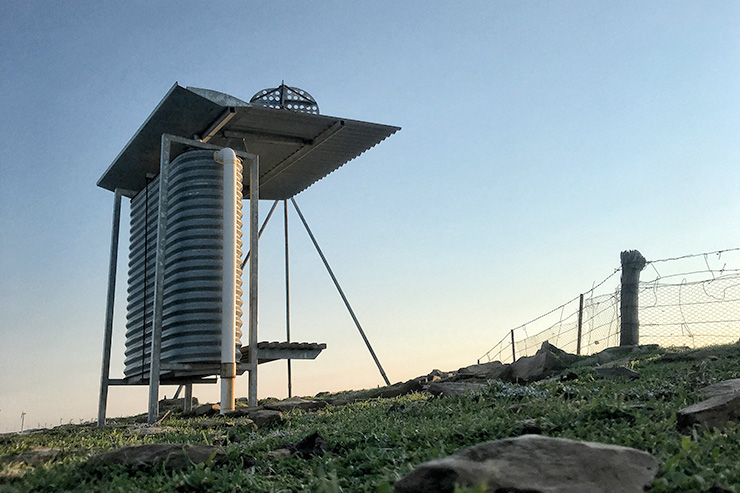 The view peeking out from the floor of my tent.

By the time I recovered the missing inventory and bundled together my thrashing tent, I felt like I had sprinted a marathon. No wonder AGL had chosen this squally stretch to build their fleet of South Australian wind turbines.

The ranges’ lofty peaks weren’t the only breezy spots in Hallett. My entire journey through this otherwise quiet farming district was brutally blustery, as continuous momentum-sapping gusts threatened to bowl me over. Thankfully, several energising encounters strengthened my resolve. 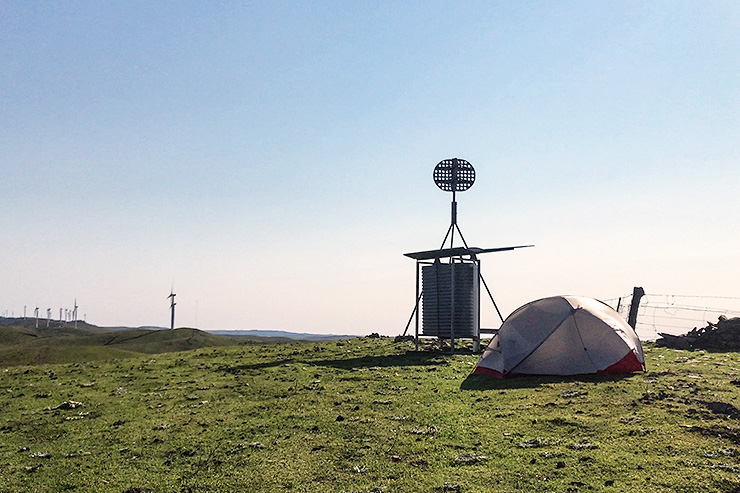 The Whistling Trig Tank in all its secluded glory.

After a much-needed lunch stop, I rounded the bend of a vacant hillside paddock and noticed a burly figure cascading down the slope. He nimbly hurdled the boundary fence and marched enthusiastically in my direction. “I’d wondered where you’d got to” his deep voice siphoned through the wind, “I’m Jeff,” he announced. “I’m Josh,” I echoed back. “I know,” he replied.

Jeff was a local agriculturalist, nature photographer and Instagrammer (which is the platform he used to follow my progress via Trekking West). He had spotted me entering the adjacent field, shortly before I stopped to eat, and decided he’d catch me on the other side of the mound. On the hike back to his ute, we spoke at length about farming, the trail and the unrelenting wind. This was my first opportunity to ‘walk and talk’ on the trail—it felt refreshing. Then with a nod, a handshake and a thoughtful donation to the Black Dog Institute, we parted ways. That was it. My first (and probably last) ever ‘Instafan meeting’. 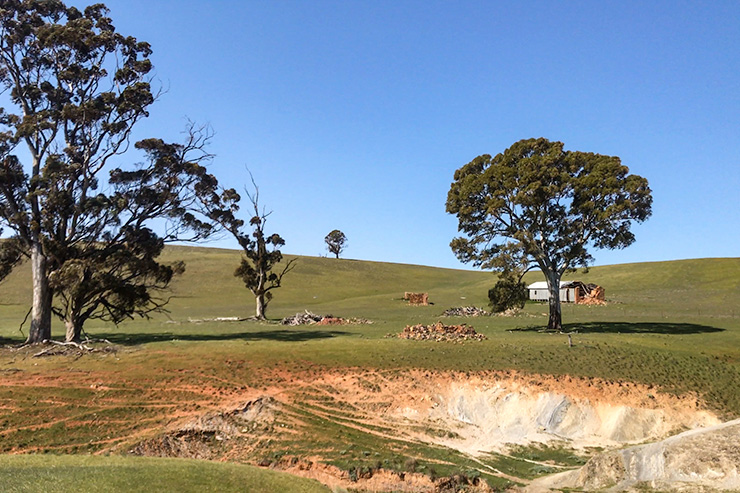 Expansive paddocks and rundown ruins were a feature on Day 28.

Another surprise awaited me at the Hallett Railway Station; a lovely couple called Marie and Dean had anticipated my arrival. They were good friends of my Trail Angel Michele, who stuffed me with goodies on Day 24, and were also following my journey on social media, via my Facebook video diaries. It appeared I had become a regular D Grade celebrity. Oh, the fame! They had just finished conquering the highest apex in the Mount Lofty Ranges, and my next challenge on Day 29, Mount Bryan, and still had enough energy to drop by and say hi.

To complete the day’s hobnobbing, my parents arrived with slow-cooked lamb shanks for dinner. I could not have been more thrilled to see them or the contents of their casserole dish. I may have only eaten my last chicken parmigiana schnitzel two days ago, but, after traipsing nearly 50 kilometres through a gale, I’d earned some pampering.

There is something uniquely congenial about South Australia’s rural residents. Whether it’s a brief hello, a simple nod, a tip of the cap, or the traditional index finger wave while driving past, I always felt welcome walking through these remote regions. 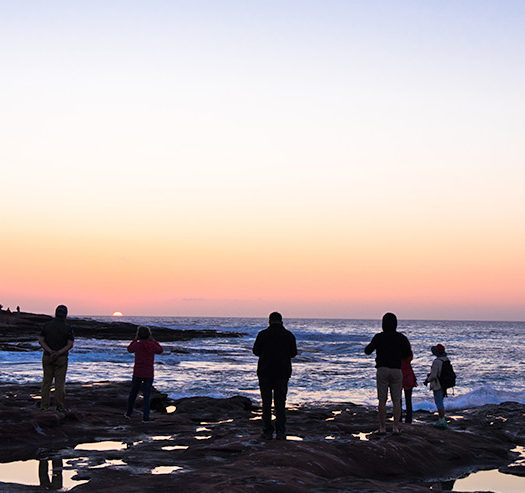 6 months of full-time travel, what have I spent?

Read More
6 months of full-time travel, what have I spent? 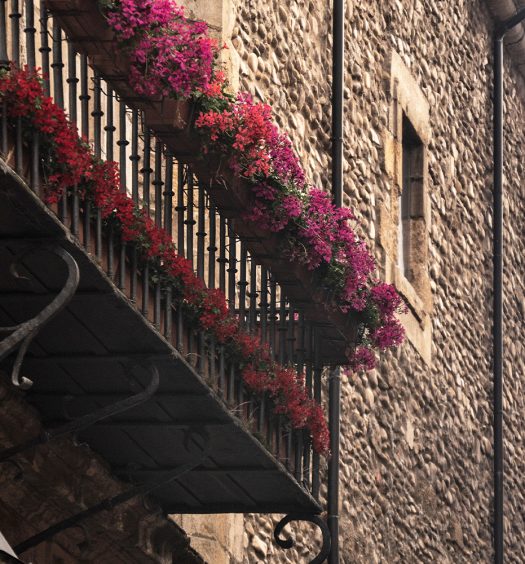