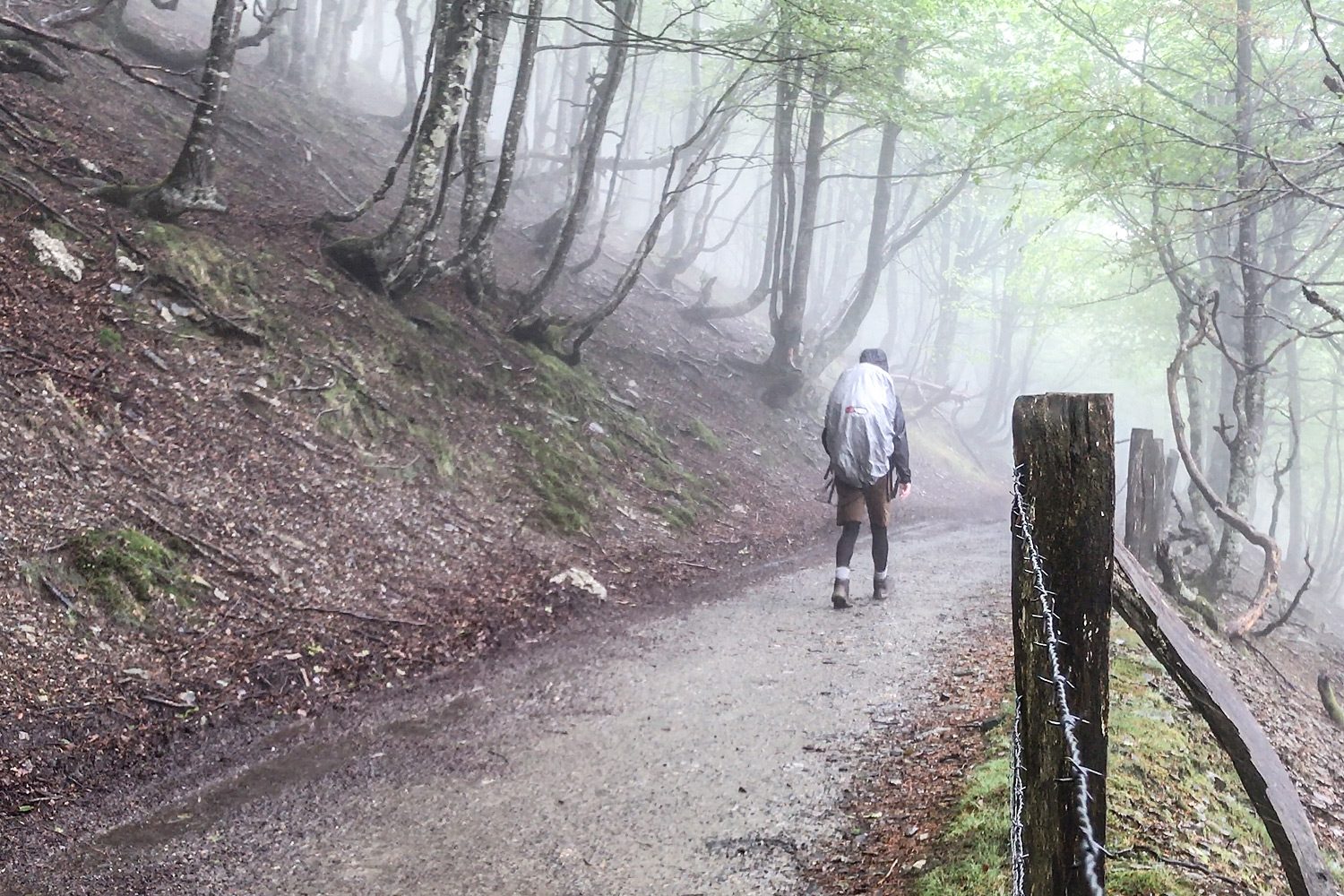 Utilise your enthusiasm, prioritise your preparation.

Over the previous evening, my fellow pilgrims had discussed the benefits of easing gently into the first morning of a trail. It’s a marathon, not a race. We had a long, steep and ominously cloudy climb up and over the Pyrenees ahead of us. Preparation would be key. However, following a 6 am flurry of adrenaline-filled hikers elbowing their way out the door on Day 1, I was left to stretch my limbs and nibble my baguette in relative peace.

I sat quietly in the Refuge Municiple kitchen as two older Italian cyclists bickered over the quality of complimentary breakfast. We’d just witnessed a hurricane of hurried pilgrims escape out the front door and scurry down St-Jean old town’s main street. Many of the eager beavers didn’t stretch, and I’m not certain they all carried water—enthusiasm can make you do weird things on the first morning of a trail.

Once I had finished my third baguette, gulped my tea and loosened my muscles, I, accompanied by a similarly untroubled Bulgarian couple, likewise exited the Albergue. However, I required one final purchase before my trail inventory was complete—I disappeared into the adjacent ‘Pilgrim’s Shop’ to find my scallop shell.

The scallop shell has been an icon of the Camino pilgrimage since medieval times. Many modern day pilgrims tie a shell to their packs to symbolise their inclusion in the peregrino (pilgrim) family.
Guidebook

That was it—the pièce de résistance—after months of planning, I was finally ready to trek the Camino Francés. I stepped out of the store and began my journey along the cobblestone path toward the Porte d’Espagne gateway—one of three ‘official’ starting points I’d discovered since arriving in town. My bag felt light, my energy was high, and my excitement had peaked. I marched purposefully toward the village exit before my nostrils caught a delicious scent leaking from a nearby boulangerie. Like an entranced cartoon character, the aroma lifted me airborne from the path and carried me toward the bakehouse—it appeared I had another ‘final’ purchase to make before I could leave town.

I zipped up the initial hills of the day’s climb, surging past the early-risers who had begun to feel the effects of the rising altitude. Fortunately, my preparation held me in good stead. The threatening weather lingered without substance as I gained elevation above the surrounding farming land. White-walled, terracotta-roofed chateaus dotted the lush valleys, as the region’s milk cows feasted on the flourishing vegetation. I stopped regularly to admire the landscape and calm my heaving breaths. Though, it wasn’t long before the provincial scenery completely vanished. 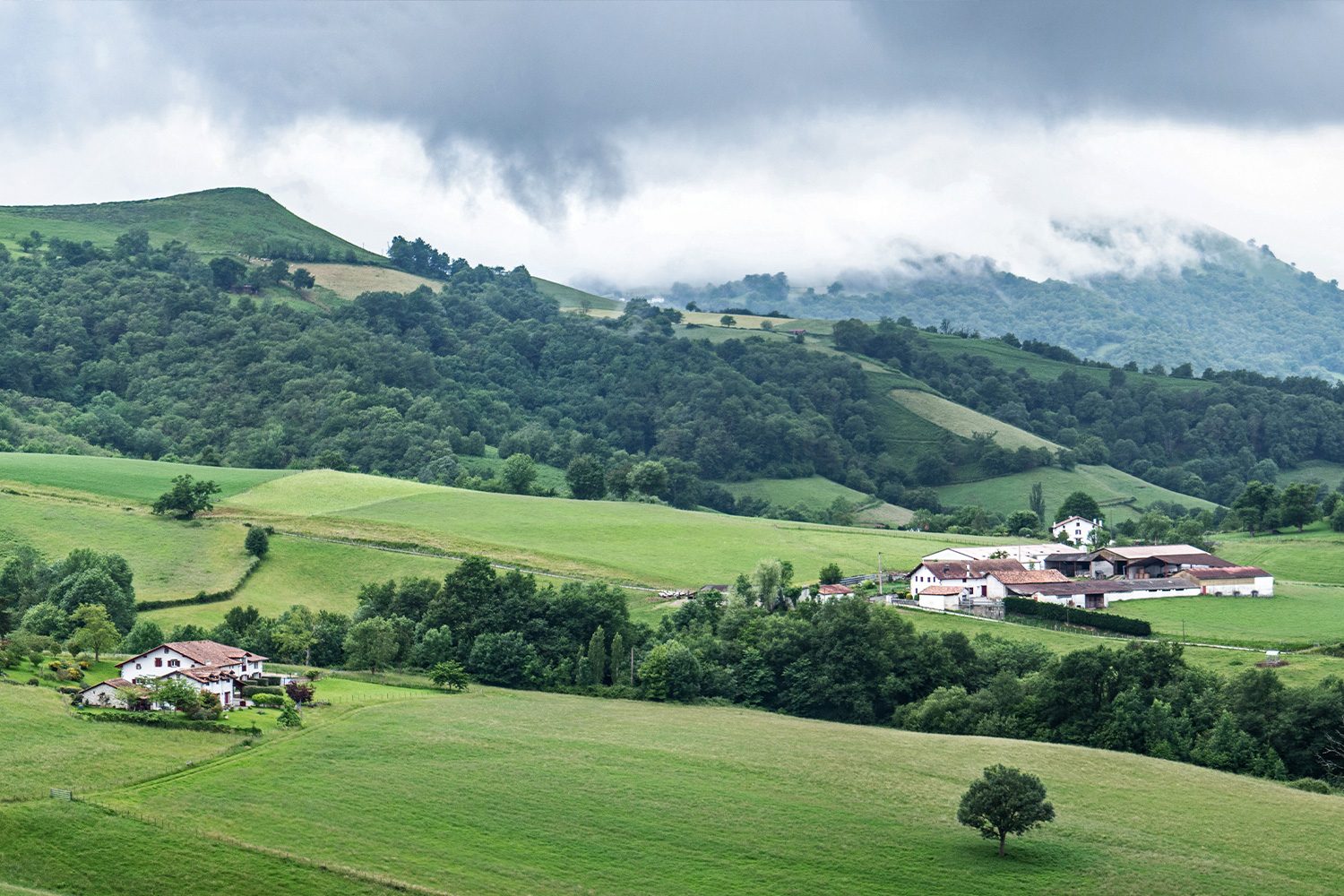 For the months leading into the Camino, my mind had fantasised about the gloriously green Pyrenees Mountain Range rippling through southern France. I had pictured the moment over and over in my head—the distant snow-capped peaks, the undulating hills, the rolling forests; instead, my eyes encountered an undiluted fog. The opaque veil barely allowed the midday sun to penetrate the haze. The clamorous jangling from the bells of the mountain’s cattle may have been the only thing abrupt enough to pierce the massing cloud.

Rain soon began spitting in my face and sent me rifling for a poncho to supplement my rain jacket. The wind then gathered pace; before long, my boots were soaked and my ‘new-adventure’ adrenaline had run dry. The region’s notoriously fickle weather had lived up to its flighty reputation. 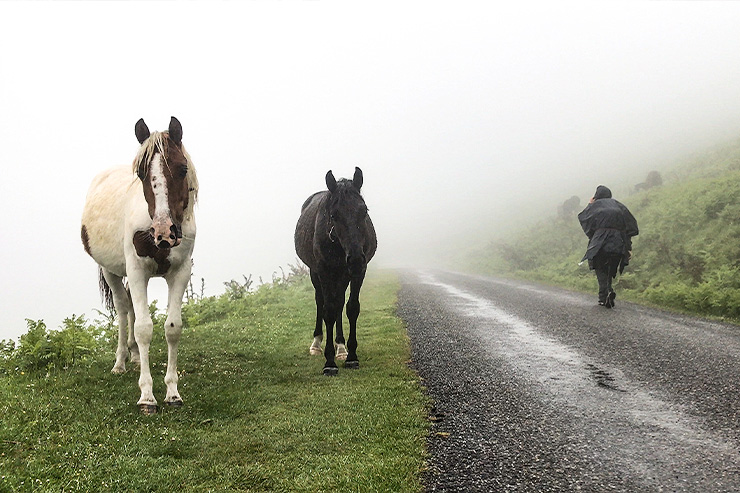 These two locals had seen it all before.

Other than a few equally bewildered walkers, I didn’t see anything but white sheets of fog, grazing roadside livestock and a handful of rambling dogs for much of the ascent. However, a heavenly vision refuelled my strength near the summit.

Many pilgrims speak about spiritual inspiration from statues and relics on the Camino but give me a guy selling hot chocolate from his van any day. This mountaintop entrepreneur was truly godsent. This snack break energised the rest of the day’s journey down through an ankle-twistingly steep forest and into Spain’s Navarre province.

There were some mighty careful steps clambering down the boggy mountain.

I felt a huge sense of relief as I walked into the tiny settlement of Roncesvalles. The impeccable facilities of the volunteer-run Albergue de Roncesvalles quickly turned that relief into delight. I had expected to find centuries-old rusty bed frames with odorous worn mattresses and lumpy discoloured pillows, sandwiched together in cramped rows. The hostel’s four-person cubicles were clean, spacious and unmistakably new. I could not have been happier (well, perhaps following a piping hot shower).

I returned squeaky clean from the shower block to discover I was in the middle of a bed swap—my flimsy grasp on the Spanish language had misguided my bed selection. However, this cubicle switch introduced me to three bubbly pilgrims who were searching for victory wines and drinking buddies—music to my ears. We soon discovered the bar across the road offered wine for €1; we promptly laid out our sleeping gear and scurried out of the dorm.

Once we each grabbed a glass, the group began exchanging candid stories about our lives, our journey to the Camino and our encounters with mental health issues. The willingness to share so quickly and so openly was invigorating. These weren’t typical people; they were pilgrims—released from the shackles of society’s stigmas. I couldn’t wait for further enlightenment on Day 2 and beyond. 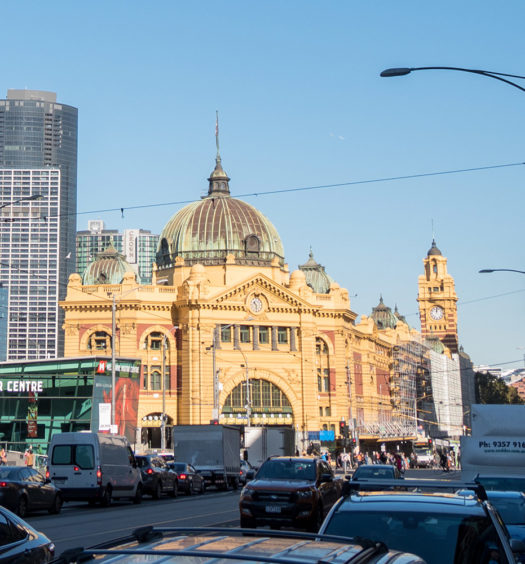