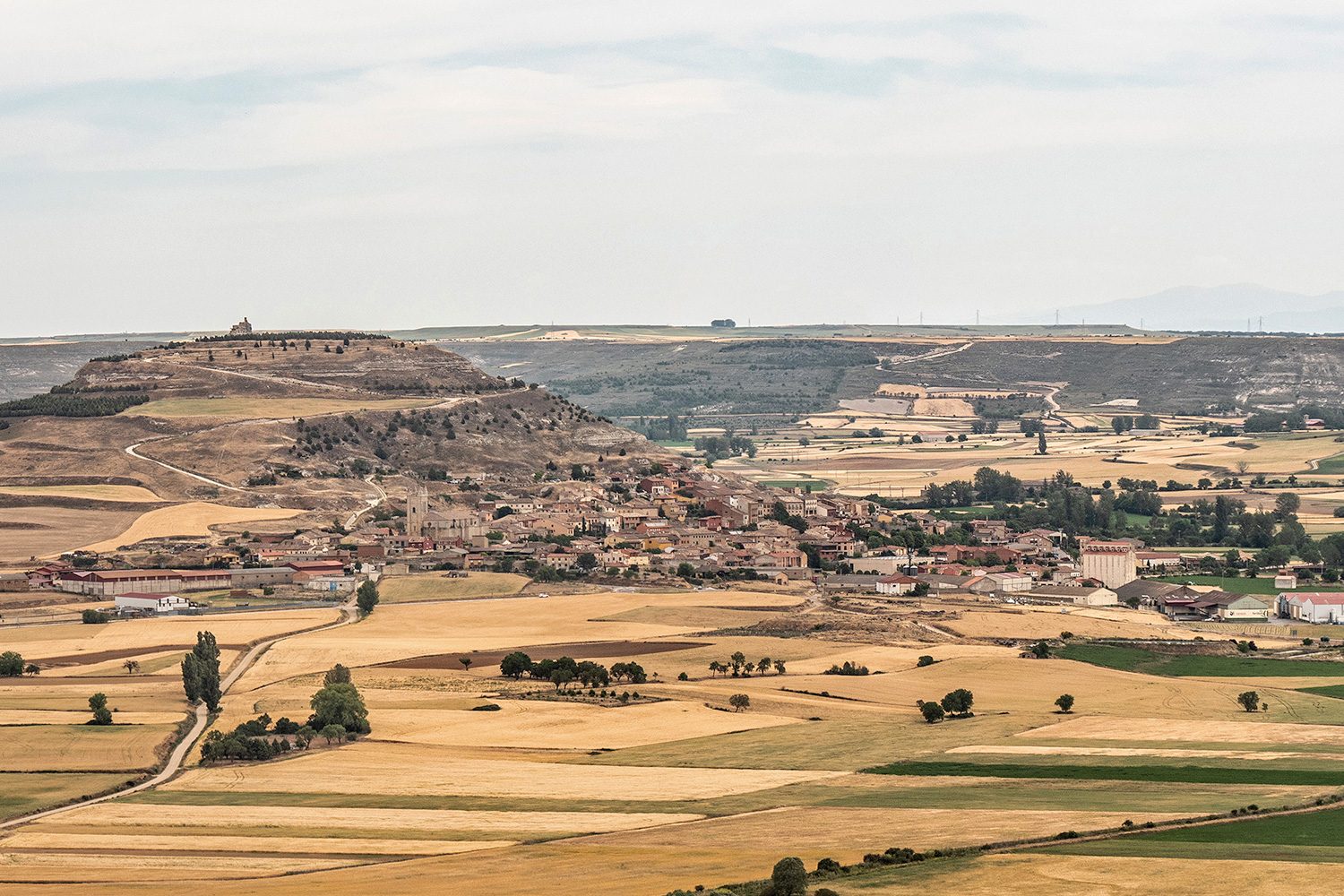 The face of adversity.

After two weeks on the Camino de Santiago, I’d witnessed the many and varied facial manifestations from the trail; new faces, familiar faces, cheerful faces, reflective faces, exhausted faces. Over the course of Day 14, I encountered the entire contingent of these characteristics; however, when I arrived in Itero de la Vega later that evening, I experienced my first display of unadulterated rage.

Chiara and I left Day 13’s remote Albergue San Bol and continued our jaunt through the Meseta’s shimmering fields, washed mauve by daybreak’s refracted rays. The track brought us through the village of Hontanas, alongside the region’s main roadway, then eventually to an intriguing Gothic archway. On further investigation, we discovered the adjoining ruins belonged to the 14th-century San Antón Monastery.

In the monastery, monks practised curing ‘evil of fire’ or ‘fire of St Anthony’, a disease widespread in the Middle Ages, caused by consuming rye grains infected with fungus.
castrojeriz.com

We spent half an hour admiring the corroded remains, entertaining the resident stray kitten and appreciating the distorted silhouettes created by the advancing light trickling over the crumbling walls. Only a handful of early-bird pilgrims and a local gardener wafted through the courtyard during our mid-morning meditation. My mind could have easily lingered there all day; however, my grumbly stomach was not as pensive. 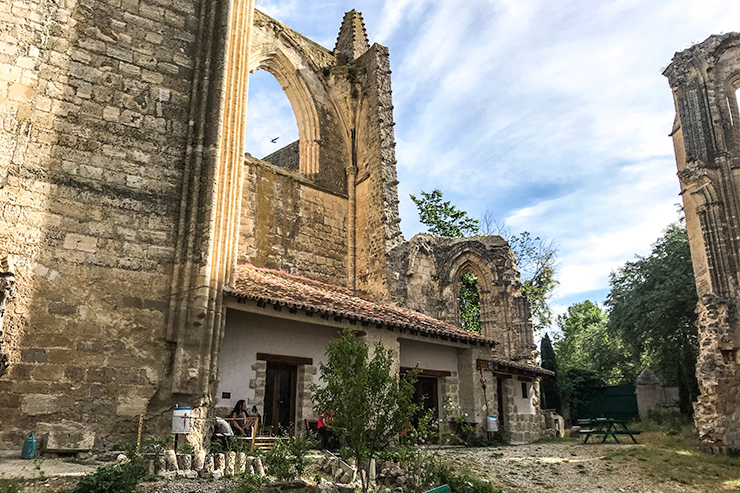 A ruin never looked so majestic.

We arrived in Castrojeriz in search of our second breakfast and a customary mug of Café Con Leche. No sooner had we selected our cosy coffeehouse seating than a familiar face peered around the corner. Susanne, who we had left to nurse her wounds in Burgos, had returned from the grave and caught us up in the blink of an eye. And just in time, we needed all the camaraderie we could rally before the climb up the city’s neighbouring range.

The shadeless incline injected yet another pint of perspiration into the rim of my sweat-bleached cap. I hadn’t braced myself for these steep slopes; from all I’d heard, the Meseta was as flat as a tack! My legs burned as I marched manfully to the top.

Thankfully, the skyward ascent to Alto de Mostelares immediately rewards passing pilgrims with phenomenal plateaued panoramas. I consulted my elevation map at the summit; this would be the Camino’s only significant bump until we passed Astorga. I’d have to make the most of these lofty views; they would need to last me for the next 200 kilometres.

Chiara and the resurgent Susanne soon joined me at the peak, followed shortly by two other pilgrims, who we’d passed, and been passed by, several times along the trail. Following a much-needed breather, we decided to travel as one expanded group to our night’s sleeping quarters. 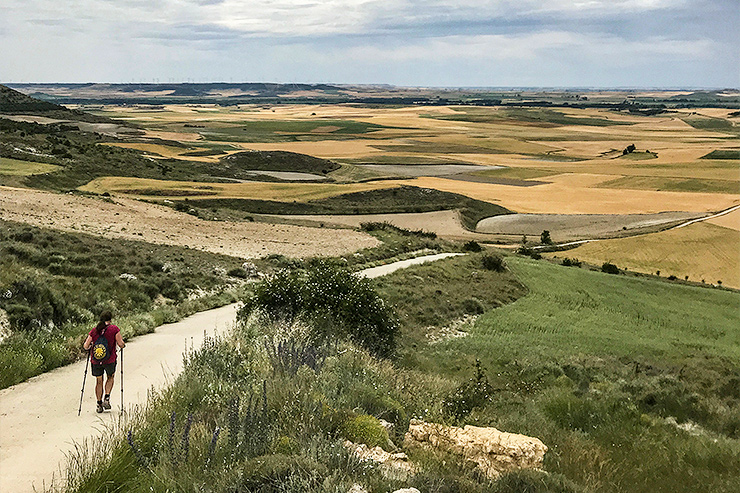 Chiara, who by now had willingly accepted the group’s full-time accommodation-finder-in-chief, had gushed over another outpost Albergue, run by her native countrymen. These charitable Italians are renowned for their exceptional hospitality, including the evening ritual of washing travellers’ feet.

We arrived at the footsteps of Ermita de San Nicolás to find pilgrims spilling from the hermitage’s enormous double doors. On further investigation, we discovered all of the bed allocations were occupied. Our tootsies would remain untouched until we arrived in Itero de la Vega, some 600 metres further along the trail, and cleaned them ourselves — much to the relief of those in the group who were suffering infected blisters.

Despite our need to move on, we were encouraged to relax and re-energise inside the converted 13th-century church. Locally-harvested fruit, bread, chilled water and hot tea were offered to the group to help replenish our strength. We were eternally-grateful after a mercilessly open stretch of flattened fields. It was evident the milk of human kindness surged through their veins.

The village of Itero de la Vega appeared deserted on arrival. Another national fiesta had sucked the energy from the locals and sent them to bed early. Having not determined our night’s accommodation, we wandered the streets until we found the most lively-looking inn. 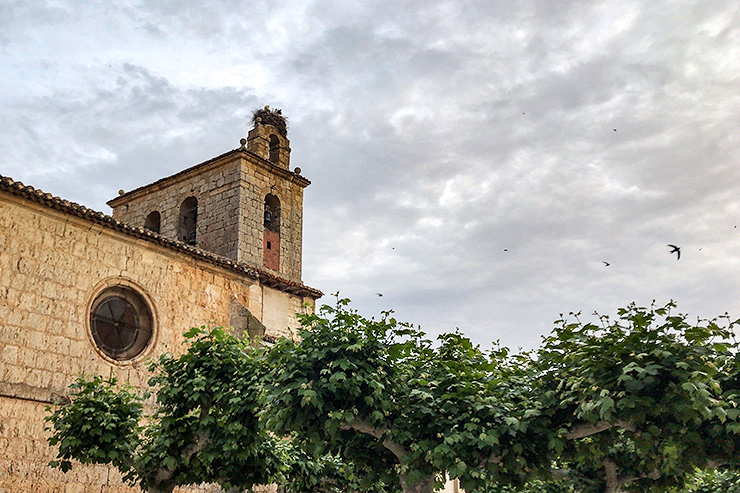 The swallows were more active than the Itero de la Vega locals.

Inside, we found the stressed owner hastily wiping down the bar, shuffling amongst tables and serving the few weary-looking patrons still awake after the day’s festivities; all with a furrowed brow permanently affixed to his face. This cantankerous expression soon erupted into rage once he discovered we hadn’t entirely settled on where we were staying.

“Out, all of you! Get out of here,” he bellowed. “You won’t be allowed back to eat! I own the only open restaurant in Itero de la Vega!”

In the space of 20 minutes, we’d experienced the best and the worst of humankind’s capacity for generosity. Society’s demand for wealth can often crush our basic magnanimous instincts and, from our first impression, these worldly pursuits had infiltrated the village’s largest inn.

Thankfully, the nearby Albergue Municipal de Itero de la Vega had surplus beds, hot showers, welcoming smiles and open arms inviting us to stay. We also quickly found another eatery (despite the barkeeper’s insistence he owned the only operating bar) and, before we knew it, we had full bellies, empty beer glasses and we had mapped out our plans for Day 15. 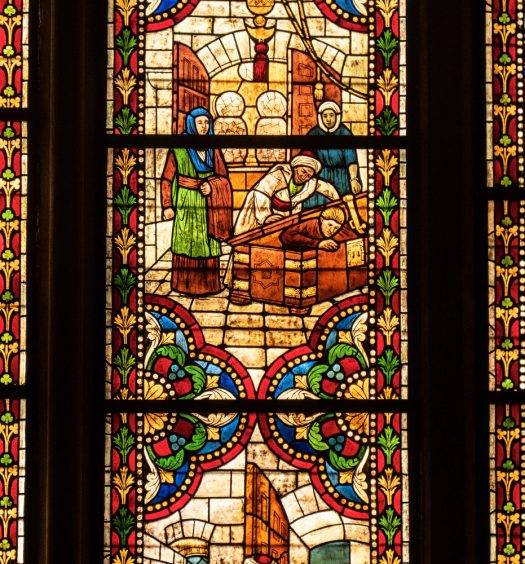 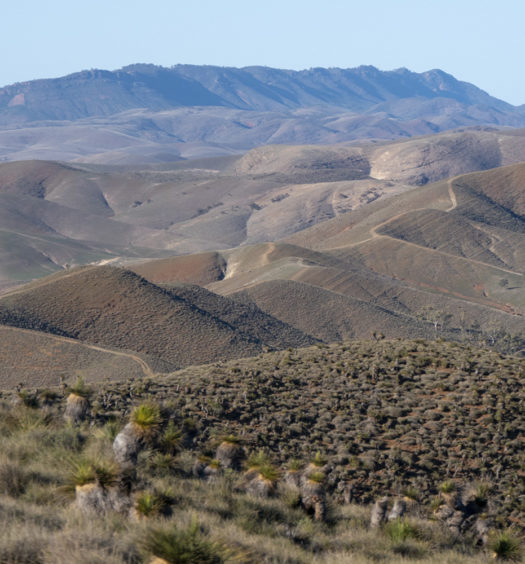