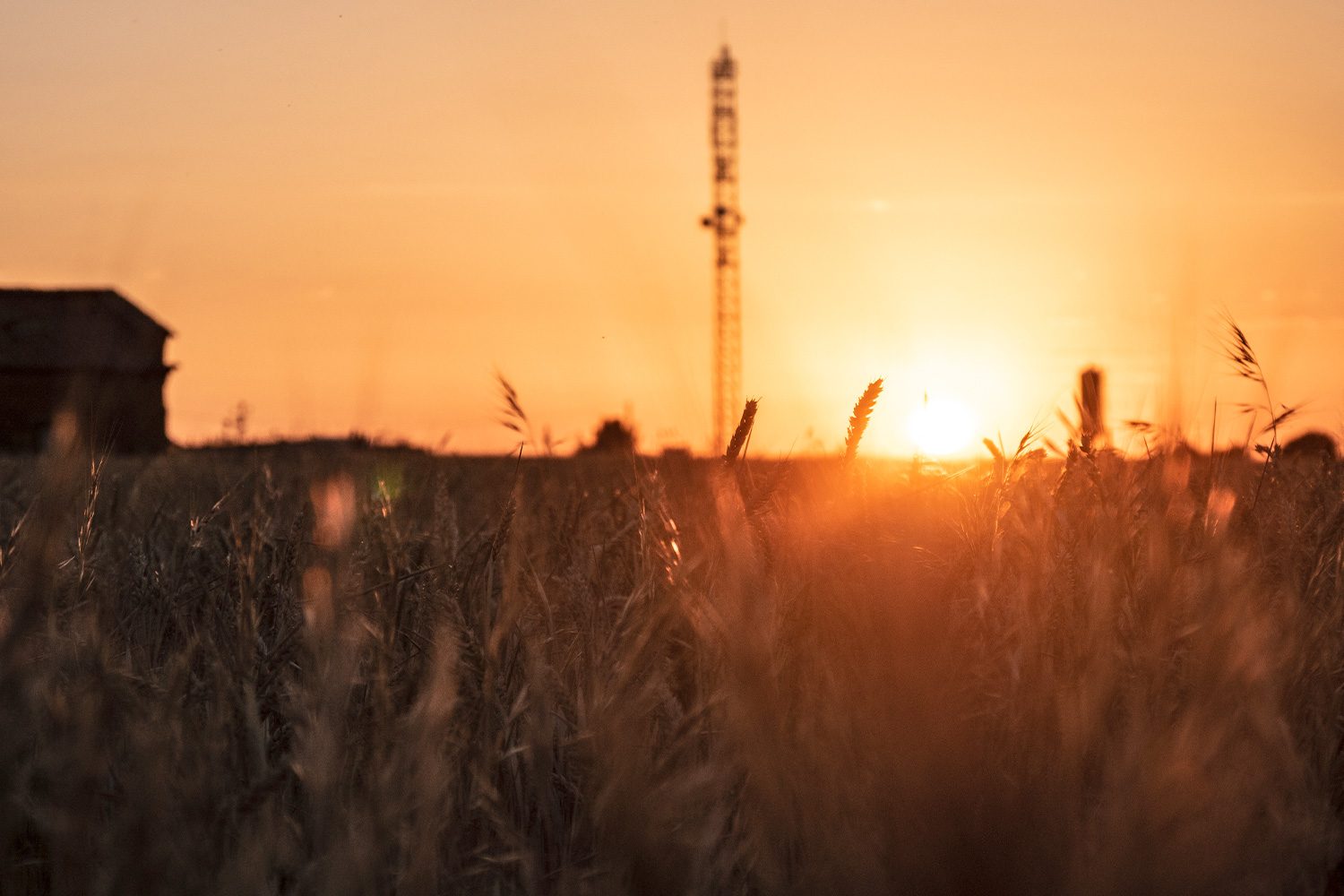 If a hiker tells you that a 790+ km long-distance journey is all killer and no filler, they’re fibbing. It doesn’t matter if you’re following the PCT in the US, the Heysen Trail in Australia or the Camino de Santiago through Spain, mind-numbing monotony will inevitably rattle your brain. Throughout these challenging times, trekkers need to recognise their achievements, especially as enthusiasm wanes. Thankfully, few long-distance trails celebrate the little wins better than the Camino Francés. I finished Day 17 with a halfway certificate, a belly full of booze and a hearty dose of much-needed momentum.

By the time we arrived in Ledigos at the end of a rigorous Day 16, there was no mistaking why some time-pressed pilgrims bypass the trail’s sun-baked centre. The abundance of wheat fields had become almost overwhelming since leaving Burgos on Day 13, and my energy quickly flatlined after realising my eyes would only encounter the seemingly infinite Meseta over the coming days. I needed to recover my optimism.

While this stretch of farmland may not be the most enlightening, the route still possesses a bounty of positives. I’d recently noticed the region attracted fewer loud-mouthed tourists, while the food and accommodation were significantly cheaper and the locals seemed altogether friendlier. Plus, the walk presented a unique attritional examination that few experiences could offer. On top of this, on Day 17, our group would cross the halfway mark of our pilgrimage to Santiago de Compostela – a mighty cause for celebration. 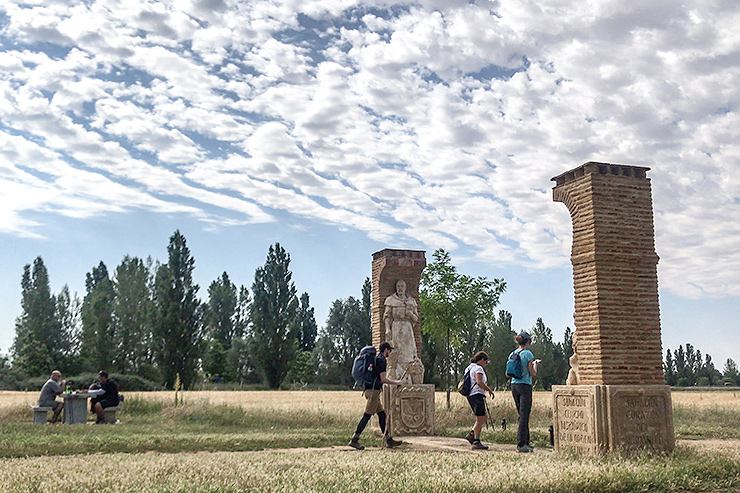 Half of The Way remains.

The ceremonious stroll over a medieval bridge, past a historic hermitage and through a pair of statuesque gate pillars represented the geographic midpoint of the Camino Francés. By the time we left the neighbouring city of Sahagún, we had filled our bellies, taken in a monastery-turned-art gallery and received certificates for completing half of our journey from Saint-Jean-pied-de-Port; things were looking up.

Sahagún endured more than its share of religious battles between Christians and Muslims over the years. Although the Christians ultimately won out, it was not before the town exchanged hands no fewer than five times.
wisepilgrim.com

Feeling a blast of motivation, I stormed ahead through the sweltering Meseta along the ‘medieval route’ toward Bercianos del Real Camino. This path adjacent to the industrious Autovía del Camino de Santiago highway wasn’t particularly appealing, but the alternative ‘alternate route’ across the overpass and beyond the distant hills added another kilometre to the walk. While I felt moderately energetic, I didn’t feel that energetic. 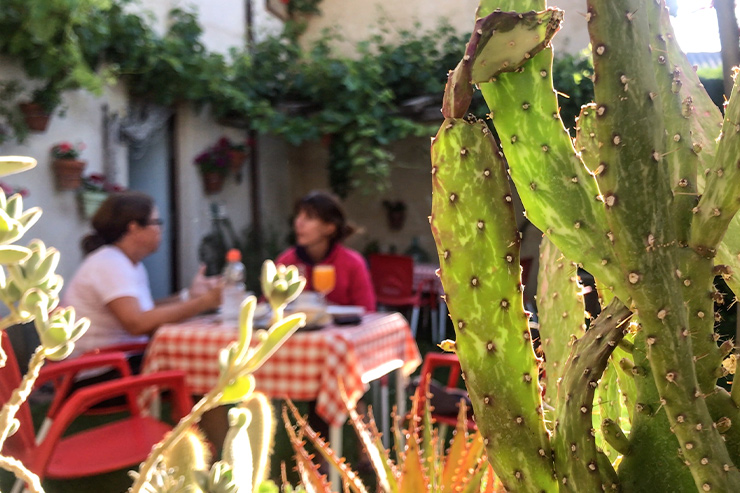 With a head of steam and a mind fixated on reaching my bed for the night, I nearly missed my name being called from an umbrella-shaded table nestled in front of a sizeable corrugated iron construction on the outskirts of Bercianos. After ten kilometres of oppressively benign wheat, how did I not see that towering contrast appear on the horizon? I must have been cooked. I wandered across the property’s manicured lawn to investigate.

Icy cool jugs of fresh Tinto de Verano were being passed around a handful of pilgrims I’d crisscrossed over the previous weeks. As loudly as I could hear my bed calling, the sweet melody of a fruity jar of Tinto sounded instantly appealing. I decided to stop for a small halfway celebration tipple and await my meandering group.

One hour and four jugs later, I couldn’t have moved on if I tried. Thankfully, the accompanying complex doubled as idyllic accommodation for a wobbly pilgrim. Albergue La Perala came equipped with a spacious restaurant, a well-stocked bar and four-bed dormitories complete with squeaky clean ensuites – all my boozy prayers had been answered. Once my walking group arrived, I convinced them to stay, grabbed the room keys, threw my bag on the dorm floor and collapsed face-first on my bed; my head swimming with sangria substitute. Before long, I had slipped into a siesta.

Sometime later, I awoke to the ding of a Whatsapp message, insisting that I meet everyone outside for a sunset viewing. While I wasn’t particularly thrilled to go out and stare at wheat again, I looked forward to the group’s daily debrief.

Once again, as the hours closed in on another energy-sapping day, the Camino had somehow managed to induce an eleventh-hour epiphany from my sedated skull. The scintillating sunset placed an entirely new perspective on tired old wheat fields: a reminder that life is all about perspective, the world can look very different if you shine the right light on it. I knew it didn’t matter how much wheat I had to endure on Day 18, my head would be in the right place.