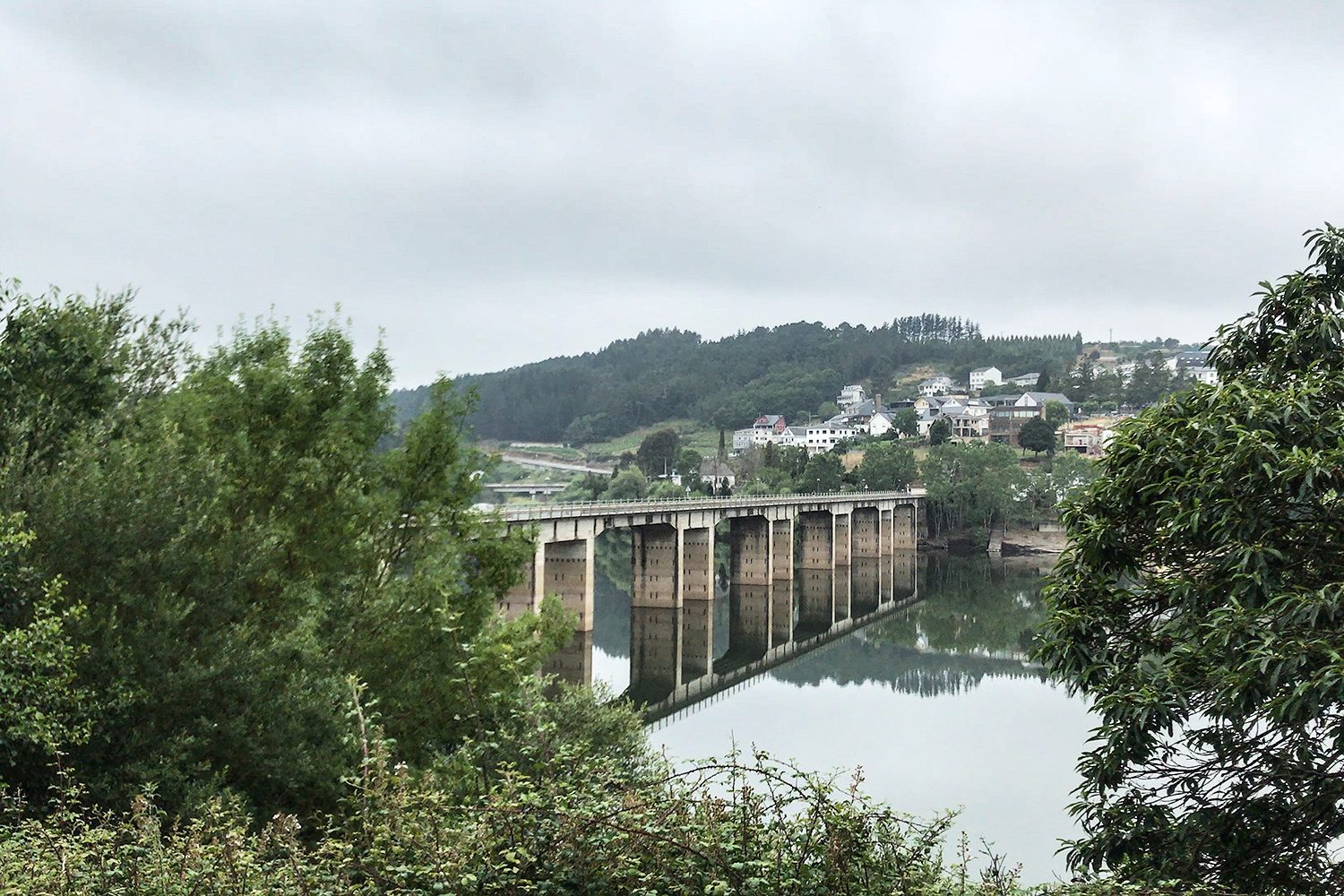 After farewelling my long-time hiking buddies in O Cebreiro, I’d expected a mostly solo stroll to the Santiago finish line. Though, I should have realised that a Camino pilgrim is never really alone; there is always a new friend to meet or an old face to find. By the end of Day 28, I realised, that with a mere 76 kilometres remaining, I longed for the company of the walking community.

A smear of hardened drool covered the disposable pillowcase that comforted my head. I had plunged face-first into an impenetrable sleep following my personal best trek to Ferreiros on Day 27. Rising gingerly, my body had few issues reminding me that I’d just completed ten kilometres north of a marathon. It took 30 minutes of robust stretching before my limbs were anywhere near ready to resume.

I emerged from the Albergue to a refreshingly overcast sky and, surprisingly, the familiar timbre of a chirpy Chilean voice echoing through the foliage. I was amazed to see my old mate Natalia appear from beyond the trees, nursing heavily strapped ankles but never without her trademark smile. After leaving her to recover in León on Day 21, I didn’t expect our paths would cross again.

She had reset her Camino from O Cebreiro some days earlier in an attempt to finish the final 100 km and earn her Compostela. Somehow we had missed each other in the bustle of yesterday’s hustle. I was delighted to have the opportunity to rub shoulders with this spirited soul once again. Natalia’s friendly nature had also attracted a neighbourhood dog, who joined our hobnobbing (and received his share of pats and ‘good boys’) until the store owner in Mercadoiro recognised him, tied his collar to the fence and irritably called his owner. We suspected this Saint Bernard had made this journey before. 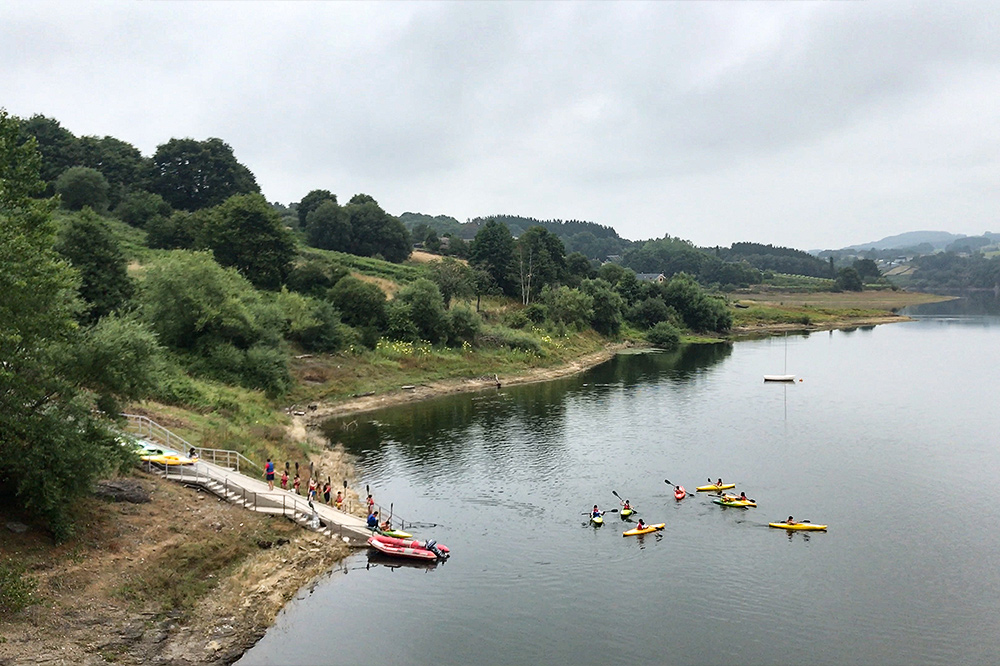 The morning’s gentle downhill route led us to the outer banks of Portomarín. Crossing the lengthy bridge into town, we observed a school of kayakers doing their best to disturb the lake’s tranquillity, plus the faint outline of silhouettes beneath the water’s surface. We thought little of the shadows and continued our passage. The town’s classical architecture and arcaded alleyways appeared centuries-old; though, we soon discovered many of the buildings were in their relative infancy.

Portomarín moved to its current location in the 1960s before the Miño River was dammed, flooding Old Portomarín and creating the Belesar reservoir. Several of the most important buildings were relocated piece by piece up the mountain to the new settlement.
caminoways.com/portomarin

Our bellies soon reminded us of the urgent need for second breakfast. We promptly found a table and ordered a hefty stack of syrup-covered crêpes. Our conversation flittered between our differing Camino experiences, the resulting worldly epiphanies, and our plans once we finished. The accounts ebbed and flowed until I realised I’d only walked 8.6 km for the day and had better get a wriggle on. Due to Natalia’s ongoing recovery, she decided to stay in Portomarín; for the second time in two days, I left dear company in pursuit of kilometres.

Natalia entering the arch at Portomarín.

The path out of town crossed a narrow footbridge and disappeared into a dense oak forest. Growing up in Australia, a land of sunburnt gums and sporadic saltbush, this dark, mysterious wood had been previously confined to fairytales. It felt that at any moment, a wily witch would emerge from the undergrowth and invite me to feast inside her gingerbread house. Though the joke would be on her; after four weeks of walking, I would need a rigorous fattening regime to extract any meat from my bones.

The route developed into agricultural thoroughfares, easy road walks and tiny hamlets, allowing me to push through the terrain. I was making quick time until I spotted a distressed cyclist whose cargo trailer had overturned alongside a busy road. Froggering carefully through the traffic, I met the cyclist’s eyes and asked if she needed help. Her panicked reply was in French, but it cried of ‘please, hurry’. I leaned in, reached beneath the wheels and began upturning the carriage. Without notice, a playful beagle appeared from inside the carrier and planted a thankful lick on my nose. A cheeky gesture, but all the payment I needed.

Following a day of unexpected run-ins, I realised that I yearned for the company and community of others. I knew a group of pilgrim mates a day or so ahead; body willing, I’d catch them before Santiago.

At the Xunta Airexe Albergue in Ligonde, I checked my daily kilometre count. It was less than half the distance from the day before. At the same time last year, I’d never hiked 25 kilometres in a continuous stretch; now, the effort felt slothful. How quickly one’s outlook can change. However, this ‘rest’ would soon be over; Day 29’s distance would nearly clear another marathon. 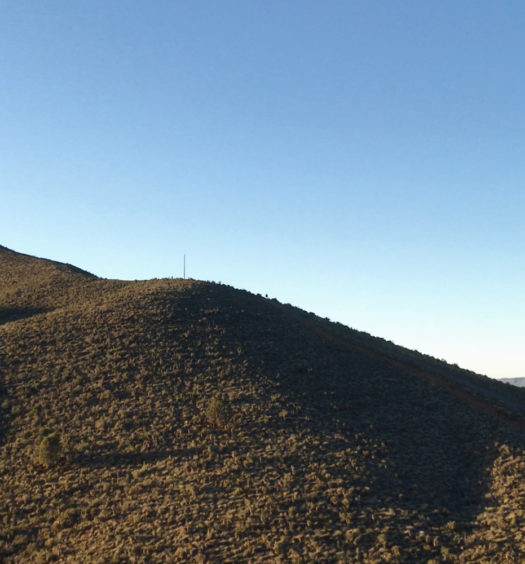 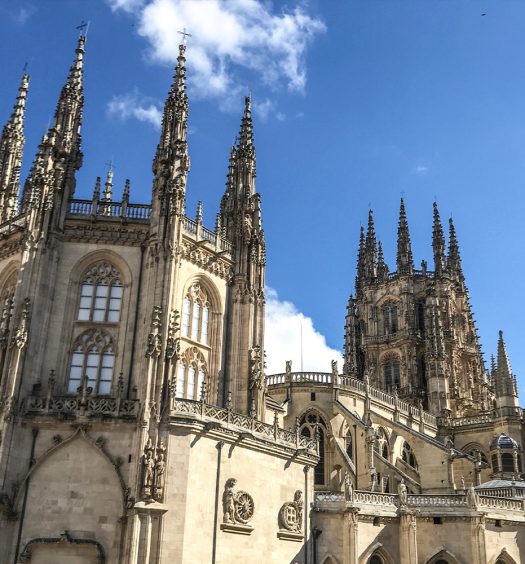