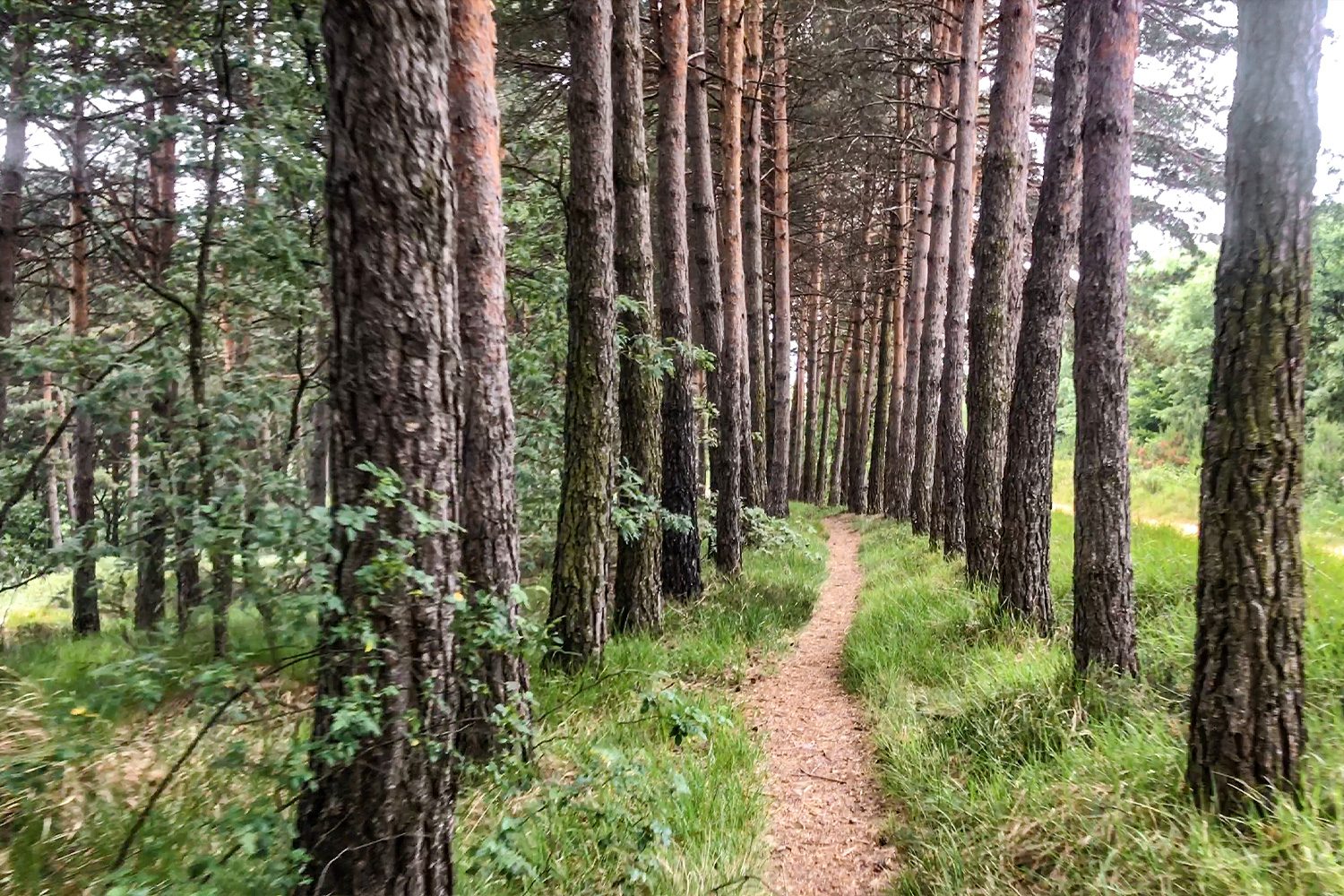 While I’d suffered my fair share of bedraggled hiking over the past few years, I’d never begun any day with a pulsating fever and little to no sleep. After a night of cold sweats, multiple rushed dashes to the bathroom and an audience to a symphony of non-stop snoring, this all changed on Day 11. I knew my energy would not last ten hours of constant stopping and group sightseeing; I put my head down and battled my way along the road to Agès in solitude.

I wasn’t sure if anyone else in our Albergue dorm spent the night lying awake in cramped discomfort; however, I knew at least one pilgrim had a restful sleep. The droning grumble of a drawn-out snore reverberated around the acoustically-amplified attic from the moment my head hit the pillow to the second the iPhone alerts buzzed for Day 11.

I spent the next hour sunken in my bunk staring at the sloped ceiling as my fellow pilgrims shuffled about their daily preparations. How did Day 10’s injection of much-needed Camino enthusiasm wither so quickly? Could I blame the somewhat dubious-looking pinchos? Perhaps bacteria trapped underneath the pool’s unventilated roof had caused the infection? Or was I suffering the effects of several tiresome days of walking? Maybe it was all of the above? Whatever the case, accusations wouldn’t fix anything; I had to forget, move on and do the best I could. 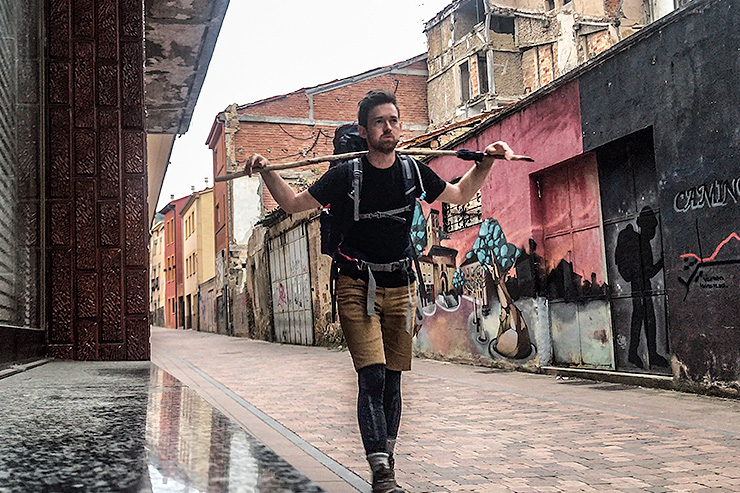 It was going to be a long day.

With my head throbbing, nose leaking, stomach bubbling, and eyes lids swollen, I stepped back out on the trail by myself. An acute case of brain fog soon set in as my walking style deteriorated into an erratic march of arrhythmic plods. Nothing would be straightforward today.

I was at least thankful for the absence of reflective surfaces leading out of Belorado. The last thing I needed was a visual reminder of how far my brain and body had melted overnight. I can only imagine what the handful of late-starting pilgrims thought as this debilitated mess of limbs wobbled past them.

My health continued to deteriorate as the day went on; only an unexpected change of scenery lightened my mood. The highway villages of Tosantos, Villambistia, Espinosa del Camino and Villafranca Montes de Oca passed in an inattentive blur before I hit the undulating forests surrounding San Juan de Ortega. 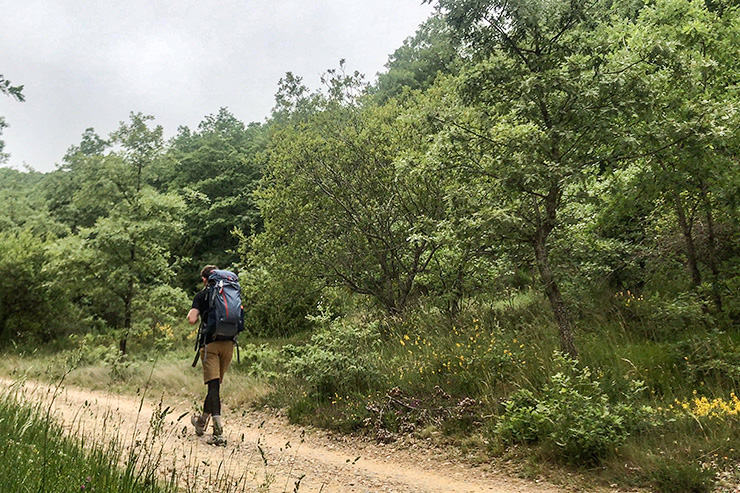 Back into the fragrant forest.

For the first time since Day 3’s jaunt out of the foliage-filled Pyrenees, the invigorating waft of pine trees drifted past my nose and opened up sinuses. The fern-lined track added a refreshing hit to an otherwise anaemic day.

Once I arrived in Agés and reconnected with the group, all I wanted to do was crash in an ungainly heap. Regrettably, I had forgotten about our scheduled tour to the Atapuerca archeological site that afternoon. While I didn’t feel like moving, I did need something to take my mind off my dwindling circumstances; the historic caves of the Sierra de Atapuerca would likely help.

We piled out of the bus to discover that the weather had cooled sharply, our guide only spoke Spanish, and the entire site was covered in scaffolding. Not ideal for a queasy monolingual Australian who had forgotten his jumper.

The caves of the Sierra de Atapuerca contain rich fossil records of the earliest human beings in Europe, from nearly one million years ago right up to the Common Era.
whc.unesco.org

Knowing my dire situation, the ever-thoughtful Chiara walked over and fitted me with her hoodie. I’m not sure which was more confronting, the noise of a befuddled pilgrim sniffling every few seconds, or the sight of him waddling around in a hot pink jumper that barely squeezed over his torso. Either way, I was a burden to the senses.

We arrived back at the Agés Albergue to the noise of coughs, splutters and a sense that the depleting nature of the Camino experience had also caught up with two of our fellow pilgrims. I felt sorry that others were suffering but oddly comforted that I wasn’t the only one battling the vagrant lifestyle.

In fact, it turned out my infected roommates had experienced considerably more challenges than my 24 hours of pain. They had battled bed bugs, severe blisters, flu-like symptoms, muscle injuries and, at various times, had to forego sections of the trail to stay on schedule. A reminder that things can always be worse. Hopefully, Day 12 would be better for everyone. 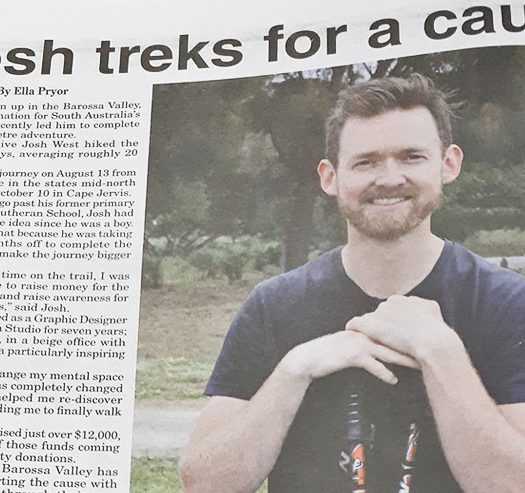